Triops are primeval shrimp that live in fresh water ponds they where alive at the same time as the dinosaurs. They can grow to be two inches long, and they live about 70 days. They double in size every day so they are full-grown before the pond dries out. What is really neat about triops is that their eggs can last for years and still hatch even if they freeze during winter, or roast in the summer! So we decided to see if they could survive in really hot temperatures so we bought some triops eggs and cooked them.

When I heard that we would have to do a science fair project, I was not sure what to do until I remembered a movie I had seen about primeval shrimp, and it had said that their eggs would hatch even after they were immersed in boiling water. Since it didn't say which shrimp were tested I decided to test triops for my science fair project. So we decided to go from not cooked to 240°F by going up by 20°F.

We soon ran in to trouble when noticed that our oven didn't go lower than 170°F. So we made an oven out of cardboard and Styrofoam with an upside-down steam iron in the bottom.

We prepared the eggs by wrapping them in small pieces of aluminum foil to make thin flat packets about half an inch square. 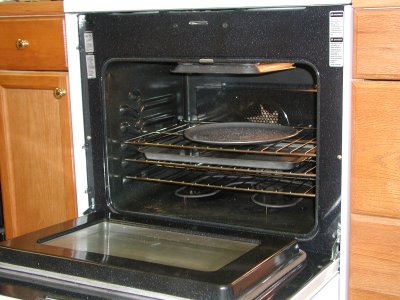 The thermometer that we used in the iron oven is a dial with an eight-inch long tube with a diameter of 1/8 inch sticking out the back. We placed the small end of the thermometer in one of the steam holes near the center of the bottom of the iron and the dial is taped to the top of the oven.

We controlled the temperature of the iron oven by plugging in the iron for five to six seconds every three to five minutes as necessary. First we heated the iron to the temperature. Then we put the eggs in the center of the bottom of the iron next to the end of the thermometer for one hour. 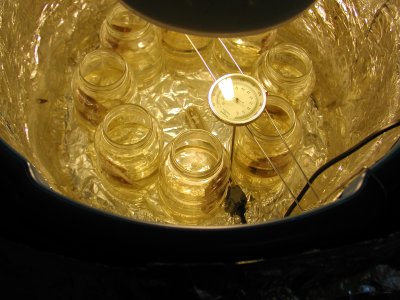 To hatch the triops and grow them we filed eight jars whit river water and placed them in a tub of water insulated with a sleeping bag. We arranged the eight jars in a circle in the tub with a 50 watt aquarium heater in the middle so that when the heater heated up the water around the jars all the jars where the same temperature. We put a low heat fluorescent lamp over the jars in the middle so thay all get got the same amount of light.

The following table shows which eggs hatched and which didn't:

How can we answer these questions?

The iron oven might have got to hot because the thermometer was to slow, and the thermometer probably measures an inch back from the tip so it didn't get the reading of the bottom of the iron.

If the eggs were bad we could have this problem fixed by mixing the eight sets of eggs we bought all together then separating them in to eight sets again.

We didn't have an idea what the oven was doing or if the oven thermometer was right or not.

We got a new thermometer that is a thermocouple. A thermocouple is two different metals welded together at two ends. When the two ends are different temperatures it produces a voltage. It is mounted in the tip of a thin hypodermic needle so it has a fast reaction time. We also got a controller that reads the voltage from the thermocouple and turns that into temperature, and it sends that information to the computer. Then the computer records it and makes a line graph. The controller also has a receptacle, which it can turn on and of rapidly to control a heater.

We used the new thermometer to answer questions 1 and 3 above. We investigated what happened in the oven and the iron oven by reenacting those parts of the experiment. The data is shown in the following charts.

This is a temperature lay out from the iron oven. As you can see it Is quite unreliable it was so post to be at 140°F.